Paul Rudnick flounders Big-Time in Big Night, a World Premiere comedy-melodrama likely to prove a Big Letdown to fans hoping for more of the same hearts-and-minds-changing comedic magic that made Jeffrey and In & Out such crowd-pleasing delights. 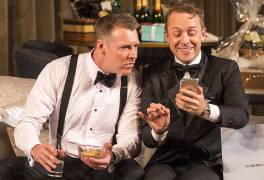 It’s Academy Award night and Best Supporting Actor nominee Michael Stratford (Brian Hutchison) is about to head over to the Dolby Theatre and quite possibly accept an Oscar as pay-off for years spent either toiling regional theater or snagging an occasional TV guest spot or movie bit.

Not only is this a big night for Michael, it’s a big one too for his firecracker of a new agent Cary (Max Jenkins), who’s so gay he’s got fifteen pairs of eyeglass frames (and he doesn’t even wear glasses); for his political activist boyfriend Austin (Luke Macfarlane), about to arrive at Michael’s deluxe Beverly Hills hotel suite from a stop at the Gay Center’s LGBT youth Oscar party; for his trans nephew Eddie née Erica (Tom Phelan), a UCLA queer studies major raised in the most traditional of homes; and for his mother Esther, who we know must be absolutely fabulous if for no reason but that she’s played by Wendie Malick. 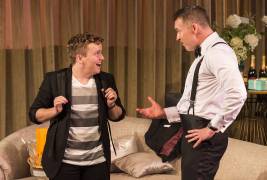 Sill, from the start there are indications that Rudnick in political activist mode won’t be the writer we’ve come to know and love for his ability to poke fun at contemporary gays (whether the out-and-proud Jeffrey or Kevin Kline’s In & Out closet case) without ever becoming strident and preachy.

It turns out that Michael’s biggest Oscar competition tonight is a cisgender actor playing a transgender serial killer (if this seems very 1991 Silence Of The Lambs, it’s not the only time audiences may find themselves feeling they’re watching something written a quarter-century ago) and Eddie, selfish if well-meaning little prick that he is, wants Uncle Michael to use his Oscar speech platform (because there’s apparently little doubt he’s going to win) to lambast the Academy for its long history of homophobia!

(I’m guessing that it’s around this time that those of the non-progressive persuasion will find themselves heading for the exit rather than stick around for more of what they’ll surely see as Rudnick’s “gay agenda,” and they may not be the only ones.) 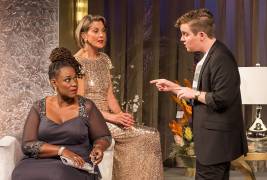 Esther’s arrival does manage to perk things up a bit, as does the surprise she springs on her son, which is that walking the red carpet by her side tonight will be her college prof Eleanor (Kecia Lewis), the merry widow’s Pulitzer-prize winning African-American lesbian lover! 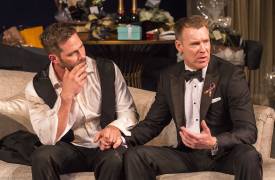 But that’s nothing compared to the cataclysmic event that follows Esther’s announcement, a game-changer takes Rudnick’s comedy into stark dramatic territory (a genre most definitely not the writer’s forte) from which there is no recovery, a tonal shift not helped by the fact that the words coming out of Rudnick’s characters’ mouths are talking points and sound bites, and before you know it, Big Night has sunk quicker than Titanic.

Director Walter Bobbie and his cast do what they can with the material, Jenkins proving a particularly sassy delight as Jack McFarland clone Cary, and it’s a treat seeing Malick play a character with more depth than those she’s normally given. Hutchison, Lewis, and Phelan, on the other hand, are hobbled by their characters’ clichés, and Macfarlane, entering when he does midway, never gets to play more than anguished. 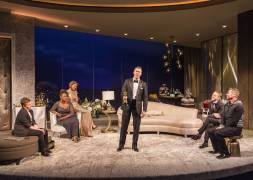 Paul Rudnick fans hoping for more of what made us fall for his previous hits will be sorely disappointed by Big Night. Big Flop is more like it.